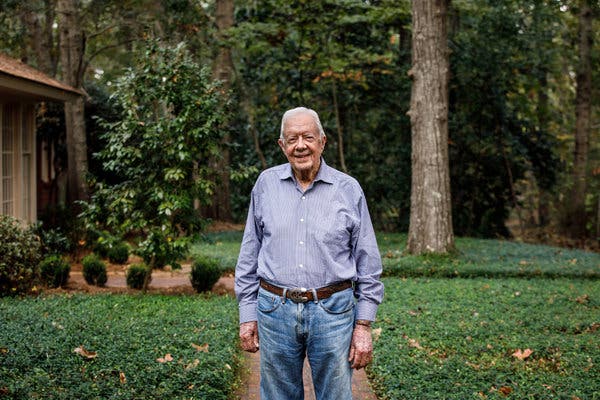 Jimmy Carter is the oldest and longest living president of all American presidents. At the age of supposedly golden years, the 39th president of the US has no signs of decline. Carter has remained a sports enthusiast since his youth, ate a lot of meat-less vegetables and was actively doing charity at the age of 95.

Jimmy Carter is known for his outdoor activities. Since high school, he has been a member of the tennis team, the school basketball, an excellent athlete of jumping and baseball.

In An Hour Before Daylight, he shared how he was addicted to hunting and fishing during his youth. He kept this passion throughout the presidency. He used to spend almost 79 holidays on hunting and fishing. In early May, during a turkey hunt, he fell, broke his hip, had to change his hip, but still planned for the next turkey hunting season.

Carter loves jogging. After age 80, his legs were not as strong as before. Currently, he and his wife switch to walking, cycling every day. He still keeps his swimming habit, whether at home or on vacations. In the 50s, 60s, he still climbing, skiing. In addition, Mr. Carter also passionate about painting, writing, reading, woodworking. These are habits that help him maintain a clear mind despite being 95 years old. In a 2013 interview, Mr. Carter said he was extremely lucky to have his wife help him maintain a healthy diet for many years.

During his presidency, Carter usually gets up at 5:30 am, has a light breakfast before the start of the working day. His diet contains a lot of vegetables, less meat, and the meals are also very frugal. He likes to eat eggplant and salad. On Sunday evenings, all the White House cooks are off work, Carter and his wife prepare the dinner themselves. The main items are very frugal, often including sandwiches or dishes made from leftovers.